Camp for Peace Liberia (CfP) is expected to begin the distribution of 500 high-quality learning content to Liberian students across the country via the Rumie tablet, an affordable device that is powered by solar energy and preloaded with a library of contents (useable offline). 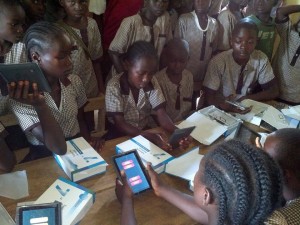 According to the Founder and Executive Director of CfP, Mr. B. Abel Learwellie, the distribution of the tablets will commence in mid January to July 2017.  He said their primarily focus will be on rural schools were the affordability to educational resource material is very low.  He stated that the opportunity afforded kids in the cities or urban areas are far times higher than those in the rural parts.  He pointed that rural kids equally deserve modern educational facilities just like any other kids in the urban area in Liberia.

It does not cost a cent by student to receive any of these tablets.  It is 100% free of charge.  All a student needs is to make an effort for academic excellent, since the tablets are not many to reach every child or student in this country.  Receiving of the tablet will be by academic merits, a first, second or third place rank holders in every class will be entitled to receive a copy of the tablet in schools that will be targeted.

Meanwhile, selected schools in Montserrado, Bong and Lofa Countries are expected to benefit from the distribution.  The names of schools will be announced in our next post.

As many of you have been following our development, we launched a campaign in late 2014 to scale up our War Affected Youth Program in Lofa, but when the project, we had no idea that the Ebola crisis was coming. And when Ebola hit, the Liberian government took the drastic measure of closing all the  schools across the country to prevent transmission of the disease.

Due to this unpredictable circumstance, we quickly shifted our plan to redeploy the Rumie devices into a neighborhood program to keep kids from falling behind while all the schools were closed.  (We sometimes call a Rumie device a “library for the cost of a book”; well it turns out that if kids can’t go to the library, then one can always take the library to the kid). This abrupt change in plan yielded into national initiative that we are currently embarking, by giving many children the opportunity to have access to affordable and modern educational resource.