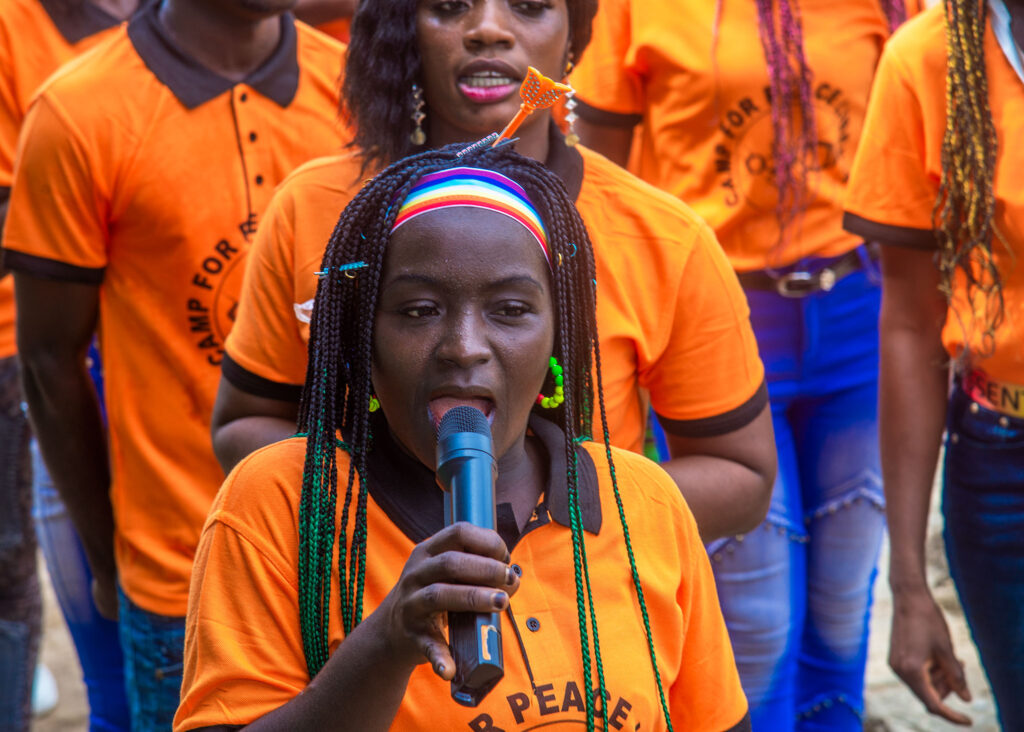 On Friday, November 5, 2021, Camp for Peace Liberia graduated 20 young men and women from its 9th vocational and 4th agriculture training program in Salayea, Lofa, Liberia. The program, which started in February 2021, is supported by the United Steel Workers of Canada and several sponsors.
Speaking at the occasion, the Executive Director of Camp for Peace Liberia gave an overview of the training, which started as far back as 2013. He said this program has trained over 525 youths with skills in various disciplines. He attributed the efforts of these youths in contributing to Liberia’s social, economic development.  Mr. Learwwellie also outlined the different training components, including animal husbandry encompassing pig production, goat raising, poultry, fish ponds, cows, etc. He named other program areas to add rice and vegetable production, palm nursery and management, cocoa nursery, etc.

Mr. Learwellie emphasized that raising these animals and producing crops and vegetables will surely boost food security in Liberia and enhance the Liberian economy from a state of dependency to a state of sustainability.

For his part, the guest speaker, Mr. Albert Kennedy, who spoke through a proxy, encouraged the students to put their skills to use. He stressed the importance of education as the bedrock for any nation. Extending congratulations and gratitude to the students, he challenged them to turn their skills into tangible deliverables to boost Liberia’s food security.

Hon. Benjamine Gorlema, the commissioner of Salayea District, also expressed the most profound gratitude to the students for the resilience exhibited during the ten-month training. He used the occasion to express his appreciation to the Camp for Peace Management, partners, sponsors, and staff for the excellent work. 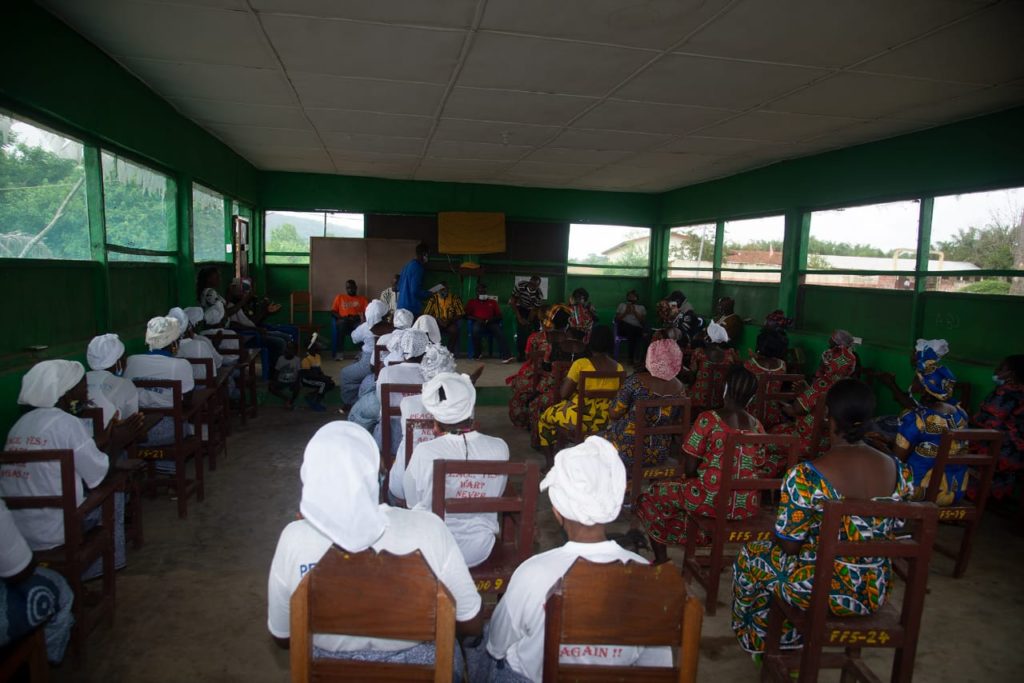 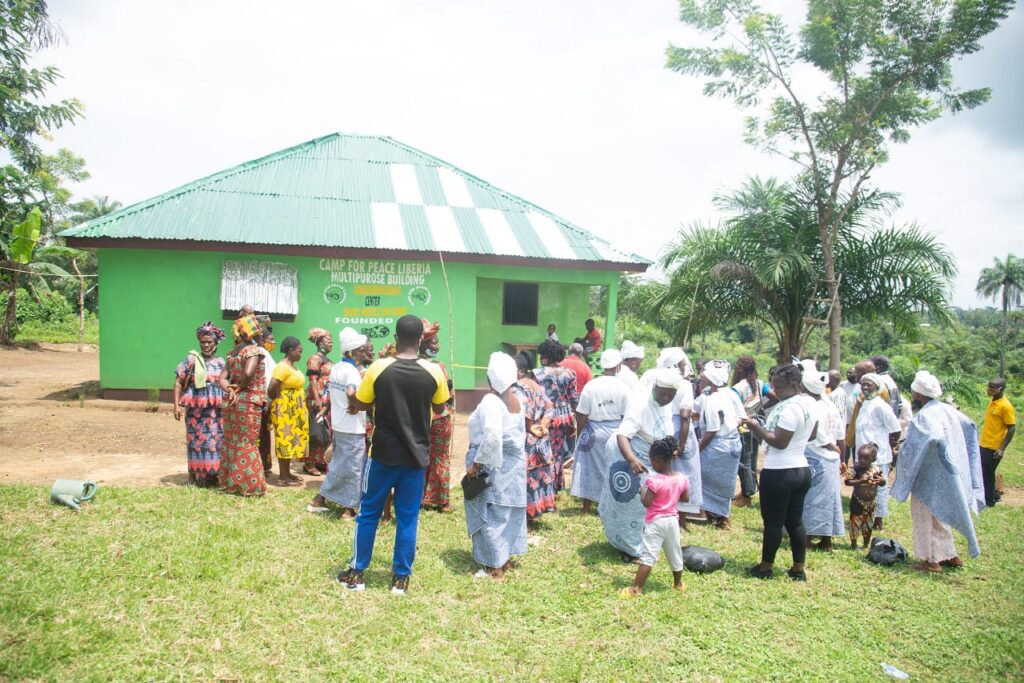 In July 2021, Camp for Peace-Liberia (CPL) hired an independent local Gender Consultant to conduct a Gender Based Analysis (GBA) in the organization’s program area in Lofa County. The consultancy aimed to identify and analyze gender disparities in household roles and responsibilities, identify barriers to women’s participation in community development projects and the exercise of their rights, and solicit recommendations on the ways in which CPL can contribute to more opportunities and greater empowerment for women. https://campforpeace.org/news/summary-of-camp-for-peace-gender-analysis-report/ 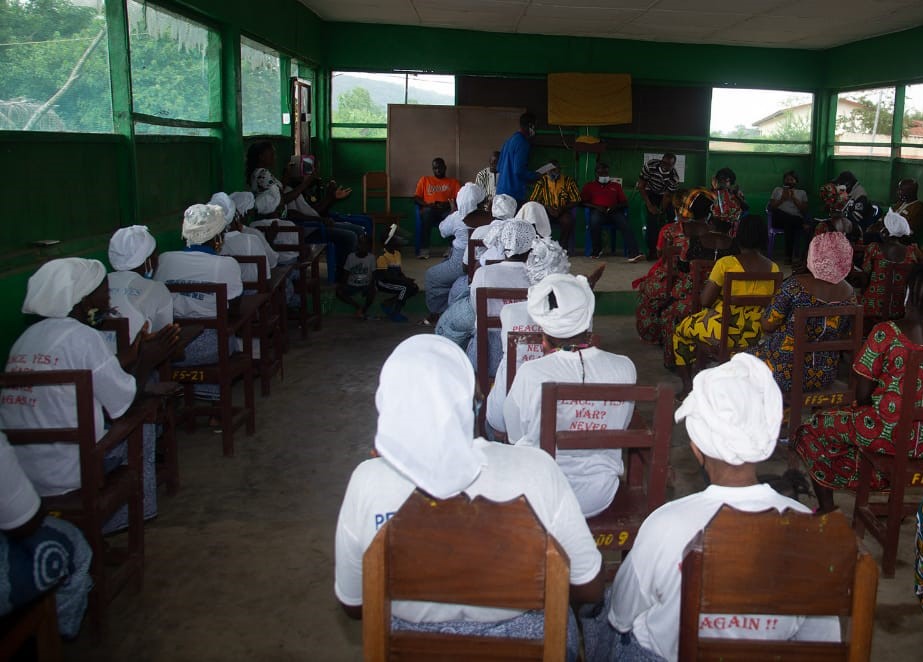 DEDICATION OF THE WOMEN MULTIPURPOSE HALL IN SALAYEA

Making a brief remark at the dedication of the building, B. Abel Learwellie, the Executive Director, gave an overview of the building and the purpose of including women in its empowerment and training program. Mr. Learwellie said he had received numerous requests from women of the two districts - Zorzor and Salayea, about adding a women component to the youth empowerment and training program in the region. He also stated that many young people who study at the Farmer Resource Center have appealed to Camp for Peace to include their mothers in training and livelihood programs to ease some of the hardships facing them. Mr. Liberia retrospected his life in the 1970s and 80s and praised his mother and sister, who did everything to get him started with a school. He stated the difficulties many rural women go through to get their children educated. He cited these synopses as the reason that motivated him to raise funds from friends and partners in the US and Canada to help with the construction of the building. Mr. Learwellie also disclosed plans that the vocational training program that currently trains young people will be extended to benefit women. He said they are currently soliciting funds to expand the training program to other courses like weaving, tailoring, food processing, etc., to include the women.

Also speaking at the dedication and ribbon-cutting program was Hon. Ben Gorlema, the Commission of Salayea District. In a special remark Hon. Gorlema firstly extended his thanks to the Camp for Peace Liberia and the partners for their donation and gift to the Liberian people, especially the people of Salayea District. Mr. Gorlema stressed that the local government of Salayea will continue to work with Camp for Peace Liberia to improve the livelihood of the people of Salayea and Liberia in general. He further admonished the women to take advantage of the building and top into every opportunity that has been provided for them by Camp for Peace Liberia and partners.  Follow the story to read more at https://campforpeace.org.

Camp for Peace aims to promote transformation, empowernment and sustainability in Liberia

Message from the Board

See details and relevant information on how you can support a child in Africa.