CAMP FOR PEACE LIBERIA DEDICATES TWO MODERN TOILETS TO RURAL SCHOOLS IN LOFA COUNTYPosted on April 27, 2019 by B. Abel Learwellie

On Wednesday, April 24, 2019, Camp for Peace Liberia dedicated two modern toilet facilities to two rural schools in Salayea District Lofa County.  The Gbansue Public School and the Flomo Respect Elementry and Junior High School are the first two schools out of five that have benefited from the Australian Government Direct Aid funded project. The remaining three schools include the Gbonyea Public School, Christian school in Gorlue and the Chris Johnson Elementary School in Salayea. 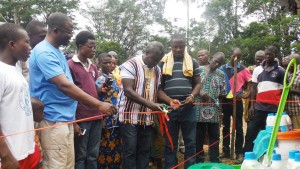 The five schools mentioned were assessed in 2018 by Camp for Peace Liberia and was noticed that there were no toilet facilities, and kids were using the bush for open defecation a condition which causes serious health risks to the students and teachers.

Cutting of the Ribbon to the facility

During the week several local government officials and residents from Salaea District participated in the dedicatory program.  For his part the commissioner of Salayea District, Hon Benjamine Gorlama expressed great satisfaction over the work done by Camp for Peace Liberia.  He also used the occasion to thank the Australia Government for providing fund for the construction of the modern toilets.  He, however, cautioned local dwellers and the school administration to design the best strategies that will maintain and sustain these toilets by keeping it clean at all times.  He tends the construction as a cooperative achievement considering the level of cooperation that was received during the construction process.

Hon. Gorlama promised that the district would continue to support the effort of Camp for Peace 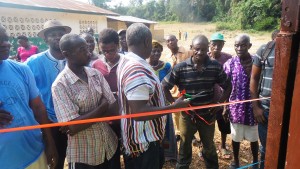 and its partners in providing more developmental projects in Salayea district and Lofa County at large.   Also speaking at the occasion was the District Health Officer, Mr. Sam Supu who committed that his office will work with the schools in making sure that these facilities are maintained and clean.  He said the health officers assigned in the district would also work with the school to train the students how to use these facilities.  Mr. Supu stresses that health is life and it gives soundness to the mind for better comprehension.  He said when our students are healthy; they will better perform in their lesson. He used the occasion to thank the Australia Government and Camp for Peace Liberia for these modern toilets.

For his part, Mr. B. Abel Learwellie, Executive Director of Camp for Peace Liberia extended thanks to the volunteers first for the sacrificial services rendered in getting the job done.  Mr. Learwellie also gave thanks to the Hon. Commissioner and the health officer for embracing their effort and buying into the project.  Mr. Learwellie said this sanitation project promises to be maintained as manifested by the involvement of the local government authorities and the enthusiasm of the local people.  “I am happy that our people can be a part of their initiative and can work towards making it happen” Mr. Learwellie used the occasion to extend his most profound thanks and gratitude to 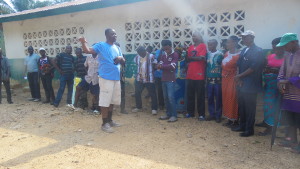 the Australia Government for restoring confidence in his organization to implement such a vibrant project.

Meanwhile, the local communities have expressed great enthusiasm and gratitude for the provision of these modern toilet facilities in their communities. They revealed their most profound gratitude in Camp for Peace and the Direct Aid Program of the Australia High Commission.