SEVERAL SCHOOLS BENEFIT FROM THE CONSTRUCTION OF MODERN TOILET FACILITIESPosted on June 01, 2019 by B. Abel Learwellie

On Friday, May 31, 2019, Camp for Peace Liberia dedicated additional two modern school latrines in Gorlu and Gbonyan towns Salayea District Lofa County. The construction of these latrines is part of the Sanitation and Hygiene Project currently being implemented by the Camp for Peace Liberia with support from the Australia Government through its Direct Aid Program (DAP).
It can be recalled that earlier this year camp for Peace Liberia was selected from a pool of applicants in West Africa to implement a sanitation and hygiene project through its direct aid program in Accra Ghana. The first two was 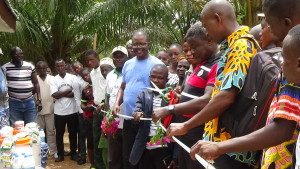 constructed and dedicated in Gbansue and Yarpuah town Salayea District Lofa County in April this year.
The dedicatory program was attended by notable personalities from the local Government, including the Hon. Commissioner, District Educational Officer, District Health Officer, chiefs, elders, and community members. It was a colorful occasion dominated with joy and happiness as the people felt relief of some of the difficulties their school face in attending nature while in school.
Speaking at the dedicatory program was the Hon. Commissioner, Hon. Ben Gorlama. He first extended his deepest gratitude on behalf of the Liberian Government to the Australia Government for their generous support to Liberia mainly rural Liberia where the project has been implemented. He also extended thanks to the Camp for Peace Liberia Program for the commitment, dedication, and steadfastness in implementing this program. He promised to continue working with the Camp for Peace Program and the community in ensuring that these modern facilities are well cared for and properly managed.
For their parts, the district educational officer and the health officer through their various representatives expressed 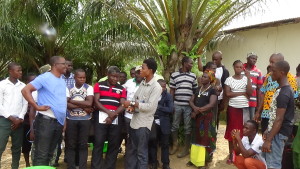 similar delight and gratitude for the construction and dedication of these new latrines. They both promised to work with the schools in ensuring that these restrooms are maintained and properly used. They also used the occasion to acknowledge the effort of the Australian Government for their support and the Camp for Peace Liberia for a successful implementation of this project.
For his part, the Executive Director of Camp for Peace Mr. B. Abel Learwellie extended the most profound gratitude to the community people and the district authorities for the level of support they have received during the implementation of these projects. He praised the Australian Government for the support and promised that the project would be sustained. He said his organization would continue to work with the schools and community people to extend the project to other communities where there are no restrooms.